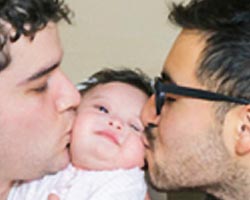 We’ve always dreamed of having a family, but we’re concerned that our baby may not be able to live with us in the US. My husband and I are both US citizens, but we understand the State Department is now refusing citizenship to surrogacy babies. — James & Daniel

James & Daniel, thanks so much for raising this issue! Not many people know about this new policy, but all Americans should understand what it means.

In 2017, the Trump administration quietly declared war on LGBT+ families. The move was one in a series of attacks against LGBT+ people. This year they doubled down on their assault. 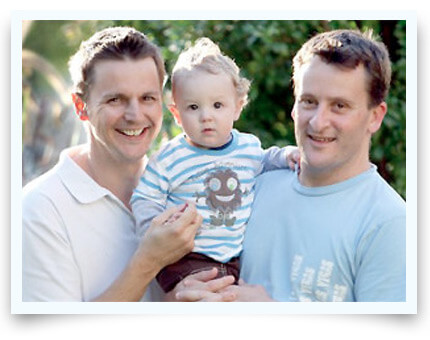 The declaration of war was quietly published on the US State Department’s website. Without notice, wording was changed to make it more difficult for gay couples to bring their biological babies into the US. The change delegitimized the marriages of naturalized gay citizens and locked their children out of the United States.

The Trump administration is currently in court arguing three cases, trying block the children of US citizens born overseas from becoming US citizens. The cases are well-doucments in numerous news outlets, including CNN, Newsweek, and others.

The most prominent case involves a couple of naturalized US citizens, Roee and Aidel and their baby daughter. Roee is the son of Israeli immigrants. He spent his entire life in the US, and he became a citizen in 2001. His husband Aidel became a US citizen in 2019, after moving to the US in 2015. Their baby girl was born in 2019 in Canada, but she was denied US citizenship under a new rule that targets LGBT+ families.

Under previous administrations since 1952, if a child was born to a married couple who were US citizens, the child also would be eligible for US citizenship. That’s true even if the baby were born overseas… if the parents are US citizens and the baby is biologically related to one of them, the baby should inherit their citizenship.

This rule is set in Section 301 (c) of the Immigration and Nationality Act. It has been the “law of the land” since 1952 — and is still clearly defined in the statute.

In an incredible move, Trump’s State Department has claimed that Aidel and Roee are not legally married because Aidel has not been an American citizen for at least 5 years. The daughter’s request for citizenship was denied because their baby was born “Out of Wedlock”.

Even though the US Supreme Court has upheld the equality or marriage rights for LGBT+ couples, Trump has rejected the couple’s legal marriage without justification and denied their children guaranteed constitutional rights.

In May, a Maryland court sided with the family and ordered the State Department to issue the citizenship for the child. The State Department has appealed that decision, and they are still pressing forward with their attack against this LGBT+ families, and others.

As an LGBT+ focused surrogacy agency, SENSIBLE is following this case closely. We are forced to advise clients that regardless of the citizenship or marital status, if they plan to return to the United States with their baby, the baby must be genetically related to a US Citizen who has been living in the US for at least 5 years. It’s disappointing to have to explain that caveat – especially when the US law (and the courts) say otherwise.

A Pattern of Anti-LGBT+ Attacks

This week the RNC proclaimed that Donald Trump is the “most pro-gay president in history”. That is a lie.

Trump kicked off his 2016 campaign by publicly announcing his opposition to gay marriage in an interview on Fox. Since taking office he has systematically tried to strip LGBT+ people of many key rights. Among those, he has pushed to allow:

Far more anti-LGBT+ attacks are documented on the HRC website. There are far too many to list here.

Some of these attacks have been temporarily stymied by the courts – but the Trump administration continues to push and appeal the decisions. At the very moment when Trump’s token LGBT+ appointee, Richard Grenell, former ambassador to Germany was declaring how gay-friendly Trump was, his administration was in court arguing that gay people were not entitled to equal health care and basic family rights.

Trump has made a clear political calculation. He has decided there are more votes in the Q-Anon movement than in the LGBT+ community. So he’s sacrificed our families to his improve his position in the polls. Trump knows that frenzied right-wing extremists vote more often than do reasonable, educated LGBT+ middle-Americans. He understands that conspiracy theorists will overcome every obstacle in November, because they will accept that world-ending plagues are about to reign down on their comfortable way of life.

In 2016, I had several friends who voted for Donald Trump. I understood the decision, based on hope that the “businessman” and “deal maker” would run the country less like a politician and more like company. It was clear that Trump had few actual ideological convictions. In 2016 there was hope that he would be a pragmatist. We hoped he could straddle the political divide and broker a deal between the right and left.

Trump promised that he could be a great “deal maker”. Given the left/right animosity in Washington, he said “he alone can fix it” by acting as the disinterested broker. He would mediate peace; he would get things done. But instead, Trump´s political calculations propelled him to be the most fanatical of ideologues. Instead of making a deal, he viciously vilified and slandered everyone outside of the fringe group that supported him. Trump made no deals… he didn’t even try.

Instead of fixing Washington, Trump has pursued only his own self-interest by empowering the far-right, extremist, uneducated fringe. These are the people who have always sought to expunge LGBT+ people from American society — and Trump is their savior. He has thrown the rest of us (and our families) to the proverbial wolves.

Since 2016 we’ve seen the painful truth of Trump’s machinations. His lack of political conviction has cost American lives, money and reputation worldwide. Trump has sacrificed the LGBT+ community to his own political ends. Now the question is whether this community have enough dignity to stand up for itself. Will LGBT+ people vote in November, and will they protect the future of their own families.

The action by the State Department against the children of LGBT+ couples is especially pernicious. That move was unannounced and un-publicized. It was not forced on Trump by the ultra-right. The move of the State Department represents Donald Trump’s personal, heart-felt beliefs. Deep in his dark soul, it seems Donald Trump is opposed to LGBT+ rights, families and equality.

I hope you will all vote early this year. If possible… go vote now.