Children of same-sex couples are healthier and happier

Same-sex parents have been challenged to reinvent the nuclear family… and it is a challenge often rooted in our own turbulent family experiences. Now it seems it’s a challenge with it’s own rewards, allowing us to build happier and healthier families.

According to a new study, same-sex families are forced to break traditional gender stereotypes, which may be one reason why they are generally better functioning and more harmonious. The Australian study (described as the largest of its type in the world) found that children of same-sex couples enjoy better levels of health and well being than children from traditional families. 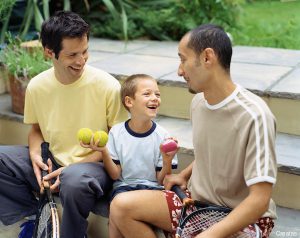 Same-sex parents know first-hand that the “Ward and June Cleaver” model of the family has never been realistic, and the continual attempt to force family members into those traditional roles has resulted in our own stress, disharmony, and even estrangement. When given the opportunity to build new family models, the Australian study found that same-sex families broke with traditional stereotypes, which allowed family members to find their own best, most functional roles. The result is a more functional family, with happier and better adjusted children.

The University of Melbourne researchers surveyed 315 same-sex parents and 500 children about their physical health and social wellbeing. According to the lead researcher Dr. Simon Crouch, children raised by same-sex partners scored an average of 6 per cent higher than average on measures of general health and family cohesion.

“That’s really a measure that looks at how well families get along, and it seems that same-sex-parent families and the children in them are getting along well, and this has positive impacts on child health,” Dr Crouch said.

“So what this means is that people take on roles that are suited to their skill sets rather than falling into those gender stereotypes, which is mum staying home and looking after the kids and dad going out to earn money.

“What this leads to is a more harmonious family unit and therefore feeding on to better health and wellbeing.”

You can rad the full article at the ABCNews website.